Karma has always been working against the Republicans, the Conservatives, the Tea Party, what ever name they want to give themselves.  This is an historical fact.  Mostly this is because they totally refuse to see themselves as the Grand Old Party.  Even when someone tells them they're not so grand their arrogance sidelines any chance of comprehension.  They truly believed that Reagan's landslide win made their shit a perfumey and that they could do what they want... and we ended up with the Iran Contra Affair.  And then George H. Bush swept that shit under the carpet, of course he only managed one term because their trickle down, Reaganomics were falling apart.  That was all bad karma.
And then we had George W who got into the White House on a technicality.  Right off the bat their bad karma started smacking, not only them, but America as well. We started a war in the Middle East over phony weapons of mass destruction, and then weekly color coded terror threats to terrify Americans into voting W in for a 2nd term... and then we got the worst recession in American History.  All of this happened while they were in the White House.
What happened when Clinton was in the White House?  The 'Dot Coms' hit and everybody made oodles and oodles of money... except Republican states... bad Karma.
And now we have the Idiot in the White House... holy smackarinis!  Let's talk about bad Karma! Ever since the Idiot got in through a technicality, the GOP has had so many stinky racing stripes in their tighty whities they're starting to call it a pattern... and, well, it is, a pattern called Bad Karma.  And, just as they always do, they're trying to point the finger at anyone but themselves.  In fact, pointing fingers is the only thing they've ever excelled at, so much so that it has become the defining characteristic of credibility in any and all opposing voices. 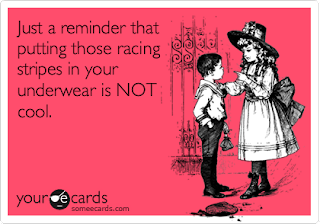 Anyway, this is my Saturday so I'm going to try and do weekend stuff.  Yeah, you know, like mow the grass.  And I want to try and hang a new ceiling light in my kitchen.  We shall see.