Well, it looks like the Idiot not only wants to have impressively low approval ratings, we find out that being President of the United States is only part of his ambition.  What he really wants to be, more than anything else, is Emperor of the World.  He'd originally set his sights on being 'King' of the World, but James Cameron already has his name plate on that door, so he's going to have to settle for Emperor.  This means (drum roll please) he's going to have to invade the Marvel Cinematic Universe!  And I understand Disney already has a working title:  "The Idiot... and the Orb of Doom!" 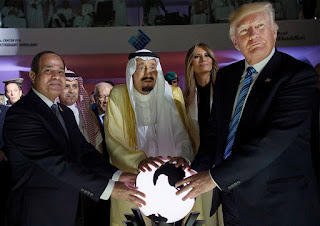 Which means the Idiot is going to have to fight, and lose, to The Avengers, as well as The Guardians of the Galaxy!  Stand back Conservatives!  Your evil plans will be foiled and smashed asunder by a shirtless Chris Evans and a shirtless Chris Platt!  Holy Crap!  The Idiot's going to get dunked by a double Chris, super charged, super hero, twin pack of six pack abs!  This is going to be huge!  really, really huge!  I can't even begin to imagine what ticket sales are going to be like.
Of course, this is all make believe, but then that's where the Idiot, as well as most Conservatives and Republicans live; out of touch, and out of mind, inhabiting a planet easily grasped in the Idiot's tiny, tiny hands.  Reality is a far flung universe to them.
Unfortunately, there will be no teaser to a sequel halfway through the credits at the end of this one.  This doesn't mean there isn't going to be a sequel, we're talking about the GOP here, they're going to keep repeating their same shitty message to an ever dwindling crowd, just like Michael Bay and his shitty Transformer movies.

Email ThisBlogThis!Share to TwitterShare to FacebookShare to Pinterest
Labels: Chris Evans, Chris Platt, Guardians of the Galaxy, The Avengers, Trump