Froggy Trump, and other things.

So, it's Saturday and I have to work.   Of course, I'm then going to have off for 2 days which is a nice thing.  The weather's been shitty: overcast, rainy, drizzle and cool.  People are not stopping in to buy carpet, or blinds, or flooring.  On a bright note, the woman who's unmarried and pregnant with her 4th is moving to another department, one where she's going to be on her feet for her 8 hour shift.  Bet that's going to change.  She sold carpet to 2 customers last week who opted to change the color prior to their purchase.  And she never updated the color change in the system.  And the installers showed up ready to install carpet that was... the wrong color.  And she did it not once, but twice.  Hhhhmmmm
I saw where Macron's campaign was hacked.  Of course.  I'd read that the American Far Right was pleased as punch.  For them the word Global is a curse.  They want another Brexit, except that's not going to happen.  Like I said, these people want things to back to the way they were.  And, of course, they're going to fail.  They hate the wonderfulness of Democracy.  They love the Idiot's Executive Orders because it's the closest they've ever been to a Republican Dictatorship.  When he squeaked into the Presidency through the back door they all danced around with glee because it's not just that they want to tell people how to live their lives, they dominate, and dictate, and say 'bend over buddy.'
I've nearly completed my play through of Mass Effect Andromeda - while there are some moments that are good, mostly it's lackluster and uninspiring.  Character Creation was dismal.  Usually when I play through an RPG I make myself hotter than hell - in Andromeda they didn't give you enough options.  Bioware touts the fact that you can have 'same sex' relationships - but there were some serious limitations here.  The Forums are filled with players and fans complaining about... well, everything.  I much preferred Fallout 4 where you could dress your companions up or dress them down, where there weren't any bad CGI cut scenes with CGI characters to constantly remind you it was a game.
And evidently some ingenious, creative person out there realized that the Idiot looks great with a Froggy face. 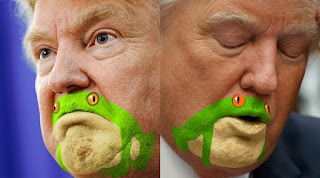 He looks so real, doesn't he?  As though this is how God wanted the Idiot to look.  Of course, maybe this is the way he paints his face when he goes to war.  I'm sure that after his supporters get a gander at this, they too will want to have their faces painted as well.  Here's a link if you want to see the animation of Froggy Trump.  And I would be surprised if the didn't start chanting 'Bud.... Bud... Weiser."
Posted by Dave R at 9:23 AM