Well, from everything I've been reading, it looks as though the Idiot in the White House is going to be signing another Executive Order tomorrow, the dreaded Religious Freedom Order.  I have no doubt that this is his Tit for Tat.  I don't even question it because he's such a small minded man.  He's petty.  His budget got kicked to September, the Democrats pretty much dictated what they wanted and... get this... he signed it.  He approved 'no boarder wall.'  In fact, there are a whole bunch of "no's"  in there that he wanted, and in his mind it's payback time.  He's going to make the majority pay by allowing a minority sect of Christianity discriminate against... gays, because they don't like gay marriage.  But rest assured, this order allows them to discriminate against more than just gays.  If you're a devout Evangelical you believe Catholics worship idols... well, this order is going to let you treat them like shit... and get away with it.  If you're dark complected and might a Muslim... "we're sorry, we don't serve you here."  The same thing goes with Hindi's, I mean, holy crap, Hindi's have more than one god!  And you never know, every Asian out there just might be a Buddhist.  Which is why this thing will be signed and then head off towards the Supreme Court where they're praying Gorsuch will give it his nod of approval. 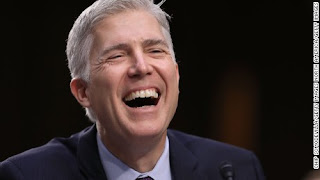 The sticking point for the might be the fact that even though Gorsuch's a social conservative, he's also a constitutionalist, meaning that his interpretation would have to be that "Freedom of Religion" applies only to Christianity.  I suspect this hot potato will be punted back to the courts, which means he's going to resort to more tit for tat.  One of these days the Idiot might understand that America is growing tired of him shaking his sagging, old man boobs every time things don't go his, and that's just going to piss him off more.
Posted by Dave R at 9:37 AM