So, Montana stayed red.. no surprise there.  I wasn't expecting to see a change in what would have to be classified as a rural state in which the population is overwhelmingly white.  Georgia, however, will be different.  And wait until North Carolina votes now that the Supreme Court has ruled that the GOP gerrymandering in that state was completely unconstitutional.  Why is it that Republicans seem to hate people of color?  Do you have any idea how many times they've been taken to court because of their illegal laws regarding voting?  Texas just got a smack back because their voting laws were written to intentionally discriminate.  This discrimination was aimed at a very large voting block of non-white, Spanish speaking people.  Of course, we should have expected they would try something like this, the Texas turn out for the Idiot in the White House was really, really huge, what with him promising that Wall of his.  Except now it looks like there isn't going to be a Wall - sorry racists.
Oh, and you know how they say a picture is worth a thousand words?  What about that snap of the Pope standing next to the Idiot... or any one of the videos that people are watching.  His facial expressions say everything.  It's obvious that he's thinking "I can't believe I'm standing next to the Shit Demon from "Dogma." 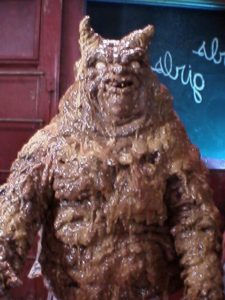 There was another funny video making the rounds in which the Idiot pushed aside the Prime Minister from Montenegro in order to make sure his egoness was center stage for a photo-op... and the whole world got to see him preen. And I don't think the GOP has any idea how terrible that looks, that the rest of world saw that little shove and thought... 'what an asshole.'  To be perfectly honest, I believe the Shit Demon probably has better manners."