What's in a Word?

Holy Crap!  It's raining again today!  This is almost like living in Seattle... or Tacoma, I know, I lived there for a year back when my ship was in Bremerton dry dock.
And, of course, the world is questioning the Idiot's latest Tweet:  Covfefe.  It could be an anagram for 'Coffee' with a typo.  Or, it could be an acronym, though I don't know if the Idiot has that much... intelligence.  I mean, if the last 4 letters stood for "Fuck Everybody, Fuck Everybody," well, then maybe I might believe this was the case.  Let's be perfectly honest here, I'm sure those two words pop out if his mouth on a regular basis.  And this whole thing is funny and not in an endearing, humorous sort of way either.  This is just one more example that helps to define his idiocy; just another target for people to aim at, and boy their slings and arrows were ready.  This was one of the best I've seen, guy named Jackson Dame came up with this. 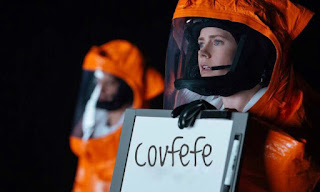 I do have to admit that one does make me laugh out loud.
Evidently the Tweet was deleted early this AM.  Soon after another Tweet took its place, questioning whether people could decipher 'covfefe.'  And sadly, there are those few supporters of his out there who are desperately wanting to believe this was his way of mocking the media.  Delusional, aren't they?
Oh, and I guess Flynn is going to start cooperating, beginning to hand over documents.  I suspect he sees the writing on the wall.
And while I'd thought I'd seen everything, until I saw this:  both Putin and the Idiot blaming the Democrats for fake news.  This, in itself, is most likely fake news, but that doesn't mean it isn't funny.  You know?  Putin coming to the Idiot's rescue, so to speak.  Simply Hysterical.