Okay, so it's Thursday morning and I'm sitting here eating my oatmeal.  We're going to be getting some rain today... maybe a lot.  That's fine, as long as it doesn't turn to ice.  The dogs hate ice.
It's that time of year when my massive retail home improvement chain hands out bonus checks to every associate.  Our store was number one for the last 6 months of the fiscal year.  To help celebrate, my store is throwing a Back Yard Barbecue this weekend, both Saturday and Sunday.  Free food is always well appreciated.
New Zealand passed a superior piece of gun control legislation.  They are banning nearly all semi-automatic weapons.  To do so was relatively easy because New Zealand doesn't have a bunch of crazies who have sanctified guns.  In New Zealand the lives of human beings are much more important than the ability to own any, and every, lethal weapon you want.  Will we, in this country, ever learn... someday... after the Conservatives are ousted from power.
And what about the Idiot Jerk and his followers whining about how he never got a Thank You after John McCain's funeral?  Yes sirree, he has fans who are shrieking almost as loud as he is about this, believing it's a sign of disrespect.  Holy Shit!  They are talking about the Idiot Jerk in the White House here, a man who show absolutely no respect to anybody.  Even when he's pumping phony praise towards someone you can tell he's lying through his teeth... or maybe I should say dentures.  In fact, the more he rants about McCain, the more George Conway appears to have nailed the perfect diagnosis on his mental state.  What's funny is that there are a number of medical professionals out there who have come to the same conclusion:  The Idiot Jerk in the White House is nuttier than a rabid squirrel.
Okay, and we have the associate at work who is a very nice individual.  Commons sense, however, sometimes flees when this person starts to talk.  Yesterday, while a number of us were in the lunchroom, this person was watch the weather channel on the big screen TV and suddenly turned to everybody and said, "you know?  we'd all be a lot safer if we lived behind a dike."  This, of course, is the image which flashed through all of our heads. 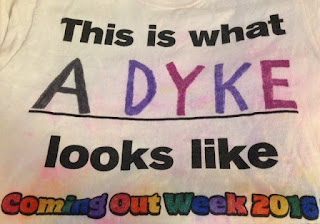 Of course, this is what she was really talking about. 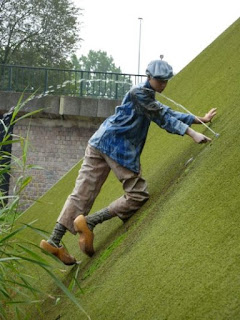