As far as Super Heroes Go

It's Monday.  Someone from UGI is going to come check out my gas line, not because there's a leak, rather this has more to do with making sure no leaks occur which is why it happens every 4 or 5 years.  I've already told them I have big dogs.  Not everybody likes 180 lbs of dogs.  Some might feel threatened.  I do not doubt that, if someone behaved aggressively towards me, Lily would bite.  Seig?  He'd just punch them out.  He's a Boxer, remember?  A really... big... Boxer.
I went to see "Captain Marvel" last night.  It was good.  Not great.  Different from the other super hero movies the Marvel Studios put out in that, like "Captain America," there were fewer big, action set pieces.   Another thing which made it different was the time period - early 90's - well before Chris Evans, as Steve Rogers, unfurled his naked torso to the world to become my most favoritest super hero of all time.  "Captain Marvel" should have been the lead off film rather than "Iron Man."  Instead, they waited until just before "Endgame," the final film in the 'Infinity War Trilogy.'  Don't get me wrong, I liked it, but you don't wait until this late in the game to bring in the game changer.  Oh, and if you're a Jude Law fan, you do get to see him with his shirt unbuttoned.  Brie keeps her clothes on. 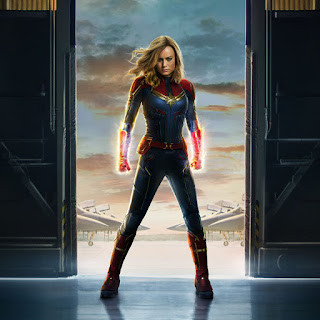 And the Idiot Jerk is handing over his budget to congress today.  Ooohhh.  In addition to the monies he wants for his racist Wall, I understand his administration is also asking for a 5% cut in domestic spending.  I didn't see any details concerning which programs the Republicans want to slash, but they, themselves don't mean that much.  What really needs to shock people is that 5%.  That's a very high percentage.  Oh, I did see, they are going to increase spending for military health benefits... that's to give the Army, Navy & Marines a vested interest in keeping him in power.  I suspect these figures are merely a smokescreen to keep people from talking about the fact that North Korea is preparing to launch a rocket.  Ooops.   Wonder how that's going to effect the stock market.