Today is not the end of my work week.
The above statement is aimed at all those people who feel the need to post some sort of dancing gif to celebrate the end of their work week totally clueless about the millions and millions of others who will be working this weekend.  If you're off this weekend and you go to a restaurant, think about your host and server and your busboy who don't work a standard five day week, or you go the mall.  Or you get sick and have to go the Emergency Room, or your house catches fire, or a tornado blows your house to pieces... think about all those people who are there to help you, who are working on the weekend, and maybe reconsider posting your little dancing gif.
The House passed an Anti-Hate bill yesterday because... a freshman senator spoke without thinking.  Her words gave the Crazy Christians ammunition.  I don't care how strongly you might feel she was in the right, this early in her political career she needs to censor what she says in public.  She is a Muslim, and as such needs to understand there is a large swath of Americans, those Crazy Christians who bow to the Idiot Jerk in the White House, who see her as the enemy.  This entire administration is virally anti-Muslim.  The meek shall inherit the Earth, not the loud mouths.
There's a lot of shrieking going on out there over the fact that another strongly anti -LGBT judge.  For everyone who is complaining, you had better be able to say with a clear conscience that you voted in 2016 for Hillary.  A vote for Bernie hurt her at the polls.  If you were one of those who stayed home and didn't vote because you thought she had it in the bag... well, think about what your choice to stay home has cost America.  In fact, you should be thinking about that daily.  Your regret should be constantly sticking you in the back.  In case you didn't know, McConnell and the other members of the Republican hate group have changes the rules so they can confirm even more Crazy Christian judges.  For those of you who didn't vote?  Think about all the damage that is being done to America.
Finally, there's a new exhibit opening at the Museum of Natural History in New York about raptors.  Among them is the updated version of the world's most favorite dino killer... the T-Rex.  Thanks to science, we now have a much better pictures of what this 18,000 lb killing and eating machine looked like, and like us, he had 3D vision.  He could virtually smell the blood pumping through your veins, and if he was hungry... you... were lunch.  Oh, and to make him even more terrifying... they now know he had feathers. 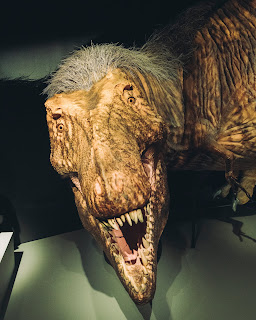 Think about that chasing your ass through the jungle.