Friday, my first of 2 days in a row.  Today I'm going to find out who my new boss is, my old boss transferred to Oregon.  He's a 48 year old man who divorced his wife and found himself a chubby 26 year old woman.  He's running as fast as possible from the worst mid-life crisis I've ever seen.  I suspect he will be in denial for many years to come.
I saw my Dr. yesterday about a small mole, it looks a bit odd.  He poked around for a couple of seconds and decided they should take pictures.  This is how it works these days.  They take pictures and email them to a dermatologist in Pittsburgh.  Mr Dr. told me that if they think it looks suspicious, they'll have it shaved off.  No big deal.  Both of my parents had to have moles removed.  It's called genetics.
The Prime Minister of Ireland, Leo Varadkar and his partner had breakfast with the Crazy Christian Mike Pence.  You know?  The the small man who thinks his beliefs give him the authority to hate?  Now, when I say small, I mean in stature and not his tiny, dirty little soul.  Don't believe me?  Take a look at this picture. 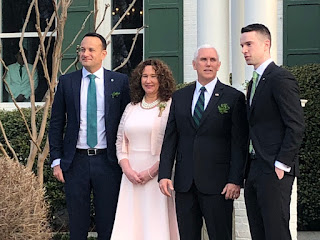 Oh, wait, it seems that Leo is 6' 4", so maybe I am talking about his dirty, little soul.  You'll notice everybody else seems to have eyes, except for Mike.  He only seems to have eye holes, which makes him look rather soulless. Like that's any surprise.
And something terrible happened down in New Zealand.  A lot of human beings were murdered.  The police have the shooter in custody.  He's described as a 'white male' with blond hair.  Should have expected that.  He published some sort of manifesto in which he ranted his terroristic, anti-immigration views.   Oh, and he's not from New Zealand, he's from Australia.  This is a tragedy for so many Muslim families.  I suspect this is the kind of hatred soulless Mike Pence might tolerate.  He needs to lose his job and be exiled.
Posted by Dave R at 6:33 AM