Well, Fall is here.  That's fine with me.  I don't mind the cooler temperatures.  They're killing off all the mosquitoes.  That's doesn't mean things are beginning to dry out, though.  No way.  Every 3 to 4 days we get showers.  Almost as regular as clockwork is the hissing drizzle of rain on my window panes.
Anyway, I just threw a load of white wash into the washer.  I'm out of white socks.  I do own other colored socks, they're a poly-blend and I prefer cotton.  I've been planning on stopping off at Target and buying more, I just haven't had the chance.  Since there's no more K-Mart, or at least none within driving distance, I've been shopping at Target.  My sister is a cashier for one of the Target's on the East Shore, so I guess you could say I'm showing them some familial loyalty.
There was another debate last evening between Beto O'Rourke and Lyin' Ted Cruz.  Sadly, ol' Lyin' Ted may pull this election out of his ass.  People in Texas love their lyin' racists.  Cruz is the Latino version of the Oreo cookie, Latino on the outside and white on the inside, which is all you need to satisfy those racist Texans who don't understand their days are numbered.
Oh, and the Idiot Jerk's pimp has died.  Hos, I think his name was.  Or maybe that was just slang for ho's.  No, I'm wrong, his name was Hof, Dennis Hof.  Either way, they have a problem out in Nevada because he keeled over so close to election day.  There's not enough time to take his name off of the ballot.  Even if they could, there is zero time for any Republican candidate to campaign.  This is... well, you might say, the way Judgment goes.  Evangelical Christians had no problem with this man. who owned and ran several whorehouses.  I remember seeing a quote in which one of those holy believers said that Hof was "really just a business man," and nothing more.  As long as he supported the Idiot Jerk, he was okay.  And now he's dead.  Struck down by God no doubt.  These fools don't realize, there is a price for everything. 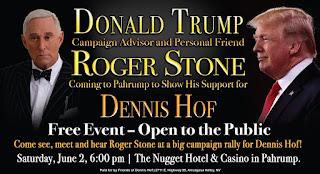 And could the October surprise be something from Mueller's probe?  Anne Marie seems to think so (key evil laughter).  We'll have to wait and see.  Though, there are.... whispers.
Posted by Dave R at 6:17 AM