The beginning of Judgment?

Well, it's Saturday and we're in the middle of a Nor'easter... or, I guess I should say, since we're not getting a lot of wind, that it's raining... again.  Some areas of the North East are getting pelted.  Not us.  All we have is steady rain, sometimes light showers, sometimes heavier, nothing torrential.
This was a bad week for the Stock Market.  Don't look at your 401k's.
And, of course, they captured the 'mad pipe bomber.'  How jolly delicious that he turned out to be a rabid supporter of the Idiot Jerk in the White House.  Have you seen pictures of his van? 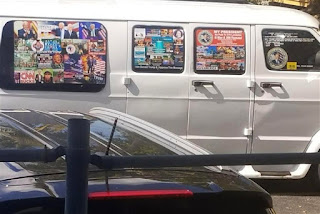 And Republicans are freaking out!  Well, that might be putting it mildly, especially this close to the midterm elections.  Like every Republican president since Eisenhower, he was... "missing in action" for the past 3 days.  There were no calming words for a country seeing first hand the fruition of his hatred.  Nope.  Perhaps because there was deep suspicion the 'mad bomber' might be one of his acolytes.  Then there was some brief praise for the FBI once Sayoc had been arrested, not much though, because when the police took little Cesar into custody the ugly truth was revealed.  The hatred the Idiot Jerk has been fomenting was thrown back into his face.  For him, truth is like Holy Water on a Vampire.  My, how loudly he shrieks and runs for the shelter of his lies.  This is what Judgment looks like.
Oh, and Megyn Kelly, that bottled blonde of phoniness has been fired.  I understand her lawyers are 'negotiating' her exit.  Which means, in not so subtle words, they're trying to decide how far up her ass that boot is going to go, the farther up, the more expensive it will be for NBC.  Stupid network banked on superficiality.
In the next 10 days, the the prurient horror of the Idiot Jerk is going to become more and more apparent. The lies will fall from his lips like shit blossoms from a cow's ass.  Republicans have always been bad losers.  Be strong!  Hold to your values!  Vote Blue!!
Posted by Dave R at 6:31 AM