Welcome to my Saturday, the last day of my work week.  I am so looking forward to my three days off... in a row.
There's a clinic at the store today - Installing a Tile Floor.  Originally I had been slated to helm this public training session - until I told them I didn't know a damn thing about installing a tile floor.  Clinics are a great way to give the public some rudimentary skills, but at our store customers want a 'hands on' training session, which normally runs for at least 2 hours.  I have never laid a tile floor in my life.  Watching a 'how to' video several times is not going to provide me with a skill set I do not possess.  If I were to decide to have a tile floor installed in my kitchen, I would pay someone to do it.  So... I told them I wasn't going to do the clinic.  So... they went to the Flooring Supervisor and asked if he was up the the challenge.  His response:  "are you freaking nuts?  I don't know anything about installing tile!"  The clinic is now being run by one of our appliance / plumbing / flooring guys.  He's managed this type of clinic before.  I suspect he will now become our 'tile clinic guy.'
An update on my progress through "Assassin's Creed, Odyssey" - I've just been to the Oracle at Delphi, which is pretty neat.  I once wrote a short story about a modern day man who visits the Temple at Delphi and for a while begins to prophesize.  I did a couple of hours research on the Oracle and Ubisoft seems to have got the layout down perfectly.  Their only misstep was in having the Pythia in a large room.  Historically, it seems, she was in a small, basement room lit only by oil lamps... lots of oil lamps, sitting on a three legged stool over a fissure from which fumes burbled upward. 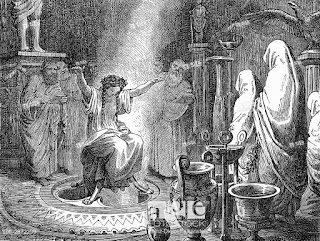 That's right, experts are fairly certain she was gassed most of the time.  I wonder how she listed that skill set on her resume.
And thanks to some outstanding Customer Service from the manager of Faulkner Subaru in Mechanicsburg, it looks like I will definitely be picking up my new Crosstrek on Monday.  The paper signing should begin a little after 11 in the morning.  I'm actually beginning to get excited.  I've been leasing for so long, the idea of purchasing is a bit invigorating.  Sure, there will be monthly payments, but I'm making those now and they purchase nothing but time.  In a few years, the loan will be paid off and I will 'own.'
Finally, my friend Steve asked out my book sales were doing.  He was surprised when I told him I wasn't tracking them.  I told him that at this point there is not too much I can really do... except start on the next one, which takes place in Paris during the last few stages of the Tour de France.