For who don't know, sometime today Mike is going to slam into the panhandle of Florida.  Right now he's a category 4.  Will he be downgraded to a 3 or a 2?  There's a possibility, though not necessarily a probability.  The 2 a distinctly different.  As I was reading about the very serious, very dangerous storm, I thought I'd look at the map of Florida and see where exactly impact was going to be the most destructive.

For those who don't know, down in Florida they call that part of the state "The Little Riviera."  Money, you know?  Big money.  Big Conservative Money.  The kind of money that loves the Idiot Jerk in the White House because... well, as everybody knows, money begats money, begats money.  Just like in the old, old days when who begat who, and what begat what, was important.  Interesting.  Pondering this, I decided to probe a little deeper.  Maybe look at the election results for the 2016 decent into evil.  Holy Shit. 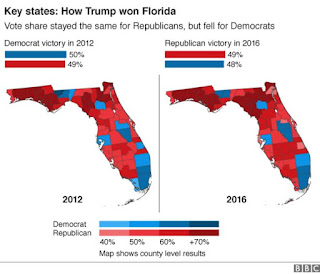 Looks as though Mike is aiming directly for those most Conservative of counties.  In fact, that whole coastline is solidly Republican.  Yes sir, that is Trumpland.  Sure, there is a democratic county north of the coastline, they will get a lot of wind and rain, however the brunt of Mike isn't going to hit them.  The real destruction will happen along the coastline... just in time for midterms.
I suspect this is what Blue Justice looks like.
Oh, and Nikki Haley resigned yesterday.  Could she be thinking of a presidential run in 2020?  I can't even begin to imagine the Republican blood bath is she does.