I'll tell you, you really have to laugh at the crazies out there, you know who I'm talking about, those idiots who let the most ludicrous shit fall out of their mouths and think it's rational.  Take Sandy Rios, for example.  This past week she inferred that the Amtrak crash may have been caused because the engineer was struggling with his sexual orientation.  Now let me be honest here, I had no idea who this woman was so I did what I usually do, a search on the Internet.  As always, I looked for an entry on Wikipedia first since they tend to fairly close to the truth.  I found zilch on her Bio page.  In fact, I found one of the warnings really funny: "this reads like a resume."  Now we all know that Wikipedia can be edited, which made me wonder why her bio wasn't chock full of phony fluff. 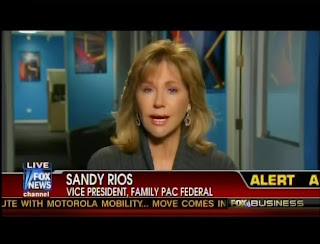 While she didn't come right out and blame the accident on a gay engineer, she did say that his orientation should be part of the discussion.  Me, I think we should also be discussing why a 65 year old woman (born in 1949), who's had plastic surgery to improve on God's work, and who evidently dyes her hair, is filled with so much hate for a minority group.
Recently the Pew Research Group came out with some rather surprising statistics:  the number of Americans identifying themselves as Christians is on the decline.  I think talking heads, like Sandy Rios, are one of the main reasons.  Why would you want to identify with a religion that seems to espouse so much hate?  Christians are supposed to be loving, yet Sandy Rios and her kind are more focused on being judgmental.  She doesn't seem to understand that she isn't special.  She is a bad mouthpiece and has absolutely no problem in letting turds fall out of her mouth.