Gyllenhaal and the wrong parts

We have a local theater which plays films that are on their 2nd release,  so if you didn't get a chance to see something the first time it played in the area, you get a 2nd chance, and, since I have connections, I get in for free.  Anyway, my connection called yesterday and told me "Night Crawler" with Jake Gyllenhaal was playing for the next week and asked me if I'd like to go.  My response was "thanks, but no thanks."  I know there are a lot of people out there who would never turn down a free movie, no matter what was playing.  Not me.  I saw the trailer for this movie a while back and decided then and there it was not for me.  To be honest, old Jake creeped me out. 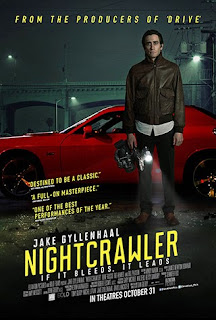 In spite of the blurbs on the poster the film is not considered "a classic," nor "a masterpiece."  You also have that catchy line beneath the title "if it bleeds, it leads,' which tells you exactly where this movie is going.  I suspect he did this film to show how "Oscar Worthy" an actor he is, because you know he really does want to win an Oscar.  In fact every role Jake Gyllenhaal has taken on in recent years seems to have only one goal, nabbing him one of those golden statues.  If he were to look at all of the Oscar winners, he'd see that strategy rarely works.  Later this year, if we want, we'll get to see him in "Southpaw," where he plays a boxer.  If Robert DiNero won for "Raging Bull," why shouldn't Jake win for "Southpaw?"
He needs to learn that it's not the part you play that wins you the award, but rather how well you play the part.