Cancellara wins prologue + 2nd in stage 1 (and I was wrong, kind of)

For those of you who aren't into cycling, Fabian Cancellara has won both the prologue and come in 2nd in Stage 1 of the Tour de France, holding on to the Yellow Jersey. 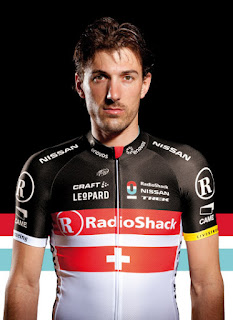 While watching the race today I was reminded of the rumors which had been spread a few years ago that he had some how managed to have a motor built into his bicycle.  Talk about desperation on the part of rumor mongers.  The truth is this guy has dynamite thighs.  Sadly, I have to return to work tomorrow so I'll have to do catch ups on my tablet when ever I can.  I'll have to see if there's an android app I can download.

Secondly, I'm admitting I was wrong about one thing.  I'd said there was no Cycling Fantasy Challenge this year, well, there is, but damn if I can locate it.  Discover Card is sponsoring it, of course, I do not have a very good history with that credit company.  Sure, their 'Peggy' commercials are funny as hell, but after I had closed out my account they raised my interest rate.  When I called to complain I was told they raised the interest rate because they could.  When I noted that my account was closed and raised interest rates usually effect new charges they said "no way, we're raising them because we can.  As I said, the account was closed and now paid off.  Will I ever get another Discover Card?  Shit no!