I finally watched the Mass Effect 3 DLC on Youtube.  Boring.  They said there was going to be some added filler to enlighten gamers as to what actually happens in the end.  The answer is a boring 'nothing much.'  You still end up with, of all things, a 2 second clip of someone laying in the rubble on Earth, someone who may or may not be Shepherd.  Like I said before, in 2 or 3 years Bioware is going to put another Mass Effect game, though who knows what they might call it, maybe Mass Effect Resurrection because Shepherd will rise from the rubble.


Next on the agenda - Cycling, the kind you do on a bicycle.  The Tour de France starts Sunday and I can't wait.  I've watched it on Versus for years.  At some point in time NBC purchased Versus and for the most part they've kept pretty true to previous years' telecast. 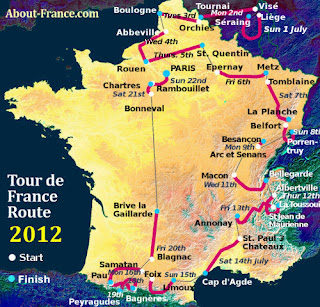 There is, however, one exception.  I've been going to the NBC Sports website daily to see if they were going to be running a Fantasy Cycling Challenge or at least a link to one.  So far?  Nothing.  Thousands of people used to participate and I used to be one of them.  I never expected to win and never did, but there was still a lot of fun in creating my own team, usually a team that did not include all of the "superstars" of cycling.  Remember, it's how you play the game; if you play it well and you win, well that's stupendous, if you play it well and lose, well, that's life, deal with it - it didn't cost anything.  But not this year, so far no link has been published.  I did go online to see if there were any listed and there are, but they cost money.  There's one in the UK which is free for the first 7 stages but after that you need to pay 10.5 Pounds Sterling, or about $25 per stage.  Give me a break!  Not out of my bank account.  So, this year, I will most likely just watch.  Oh, and I will not be signing up to watch the live broadcast from my tablet.  My employer would not be thrilled to find me sitting at my desk watch the race live.