Aurora and the stupidity that follows

What happened there was tragic, an aberration of what is normal.  With a populations of over 300 million we are going to experience aberrations from time to time.  How we deal with them is what is important.  This shooter was going to do what he was going to do, additional gun restrictions may have slowed him down somewhat, but they would not have stopped him.  One commentator mentioned metal detectors, how stupid,  Holmes entered through the front without weapons, left through an exit and came back in.  Another commentator noted that the "klaxon" did not go off when Holmes went out and I'm thinking, people use those exits all of the time when the movie is over.  I use them.  I used one to leave the theater after Snow White and the Huntsman.  Perhaps the stupidest thing I heard of were the comments by Louie Gohmert, an asshole from Texas.  He opened his mouth and shit bricks of stupidity fell out. 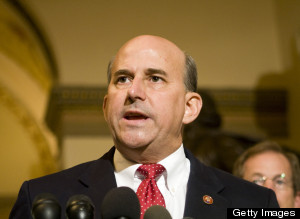 This is pure stupidity:  “Well it does make me wonder, you know with all those people in the theater, was there nobody that was carrying that could’ve stopped this guy more quickly?” Gohmert said.  Evidently he doesn't understand what "full body armor" consists of, other wise he would have realized that taking a shot at a shooter wearing "full body armor" is a waste of bullets.  He evidently has no conception of what it must have been like to have been in that theater, with pepper spray or tear gas burning  your eyes, and probably 250 plus people screaming in panic and trying to get out, and bullets flying bang, bang, bang, bang, bang.  I suspect Louie Gohmert is as much of an aberration as James Holmes and we're just going to have to deal with him.
Posted by Dave R at 10:39 AM