This is why I didn't really want to watch it, but I did, for about 45 minutes.  What I saw looked fairly chaotic with nincompoop commentators failing to create something cohesive out of a commercial break nightmare.  Every six minutes NBC shoved two and a half to three minutes of commercials down you throat. This is why they paid 1.8 billion to air the 2012 Olympics, not to give you the best possible coverage, but to make money.  They make money selling ad time.  Wall Street loves this.  Me?  I hate it.  When I watch something that has a narrative line I want to be able to discern that narrative line, I don't want to watch shots from fourteen different camera angles which succeed only in creating abstract  images.  Case in point, the entrance of all of those Mary Poppins'.  Dippy Viera said something to the effect of "with all this evil present look to the east," and the next second you saw them landing.  Where did the come from? Did they jump out of helicopters. 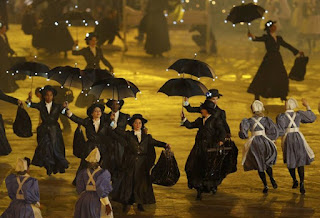 Kenneth Brannaugh read something from "The Tempest" and then you saw him wondering around, was there a purpose in his wondering?  Was he supposed to be an observer of the Industrial Revolution?  I kept thinking he looked like Abraham Lincoln without his beard.

Watching the competitions this AM I noticed commercial breaks have been cut back, some what, they are still way too frequent, usually occurring after eight or nine minutes and they're wasting about 2 minutes of time.  How much time will I spend in front of the TV?  Not very much.  While I find the Olympics entertaining, I don't share the addiction so many others seem to have.  I don't need to win every competition to pet my ego.