Yeah, I slept in this morning.  I had a couple glasses of wine last night to celebrate the Electoral College vote cementing Joe Biden as our next president.

Billy Barr resigned, and while I didn't read it, I understand his resignation letter was 'fawning.'  He does love his tinfoil dictator, so I suspect his refusal to spread the Idiot Jerk's lies about voter fraud had more to do with trying to keep his own ass clean for the history books.

I saw this morning where Moscow Mitch finally acknowledged Biden's win.  While most don't understand, he was the one behind the horrendous spate of conservative judges rather then the Idiot Jerk in the White House.  Mitch thought he was working on his own conservative legacy.  Dumb shit.  Stupid conservatives don't realize Covid is going to be their legacy.  He's going to be remembered as the man who allowed hundreds of thousands of human beings die while only focusing on judges, and they will have to live knowing their conservative beliefs were deemed more important than human life.

Last evening Uncle Joe called the Idiot Jerk in the White House  a lying sack of shit using words that were far too nice.  I understand that the votes by the Electoral College, without one renegade voter, pretty much screwed over the Conservative Media, proving them to be total failures.  Good.

And for those of you who don't know, I am sitting in the bullseye of a winter storm warning.  Yepper, the predicted estimates are between 14 and 22 inches of snow.  I'm am scheduled off tomorrow, when the storm is supposed to start and will take off Thursday if the predictions come true. 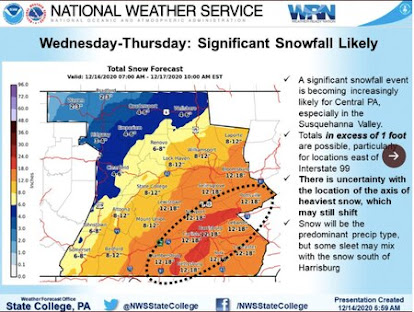 Oh, and in case you're wondering, we still have snow shovels available, no blowers though, we sold the last of them yesterday.