Yesterday was a good day for accomplishment. Many little chores were completed.  I always feel good when that happens.  I even took the dogs out for a walk since the temps were relatively warm.  I have a sneaking suspicion this winter is going to turn out like last.  For those who don't remember, December of 2019 was brittle and cold, and then we warmed up to comfortable fall temps for January and February.  The arctic air stayed north.  Even though I don't mind snow, I wouldn't mind another warm winter.

On our walks, the dogs and I pass what used to be a small Day Care Center which closed down over a year ago.  Yesterday there were 2 vans in front, a plumber and a contractor... oh, and there was a sign that it is going to be the home of Hope Church.  That made me pause because directly across the street is a very large Methodist Church.  Then I realized that Methodists and Cracker Jack Crazy Evangelicals are basically 2 different groups trying to exist under the large umbrella of Christianity.  I couldn't help but think about the best word of advice you can give to a fledgling business:  Location, location, location.  I'd say this was the equivalent of setting up a Mom & Pop convenience store next to a Target... or a Walmart.  Ouch.

And I have myself set up to receive breaking news notifications.  Truly, I was baffled yesterday to receive a notification yesterday that Lori Loughlin had been released from prison.  I found it sad that a manipulating user like her deserved a headline, and even worse that some might even consider it important.

I heard whispers that the only reason the Idiot Jerk signed the relief package was because he received a call from a 'desperate Republican senatorial candidate from Georgia,' begging him to do so.  I can not wait for this shithead to be flushed.

Yesterday I went for a run / jog somewhere in New Zealand.  The scenery was nice... except for the steps.  For some reason the decision was made to take a route that included many steps.  Steps slow the runner with the camera down.  That doesn't happen when you're on a treadmill.  Anyway, since I didn't take a picture of the scenery, I decided to include one of how I ran / jogged.  The colors are nice.  You'll notice that the Blue is on top.  I always new we blues were Tops. 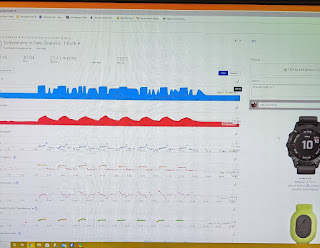