The gift of Coal

Yesterday was fairly slow at work.  Covid is beginning to rage and Christmas is coming, so most are putting flooring purchases on the back burner for now, except for those who do not celebrate Christmas and they seem to be growing more concerned about the Virus.

Snow is in the forecast for Central PA; about 3 inches are expected during the day tomorrow.  After tomorrow, I'm not scheduled to work until Thursday - on Wednesday they're predicting over 8 inches.   We shall have to wait and see.

Rather than have a Holiday Party this year, our store is doing the 6 days of Christmas.  Starting on 12/19 associates are going to be treated to food and small gifts, one of which is going to be a succulent.  That's nice.  I do love my succulents.

A new ornament arrived yesterday for the winter theme of my all season tree. 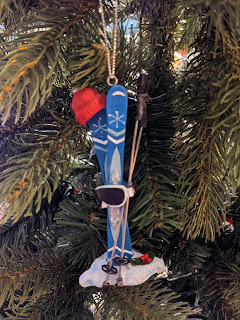 I saw where the Orlando Sentinel retracted their endorsement of Mike Waltz.  He was one of those members of the House who signed that Amicus supporting the Texas lawsuit.  They said something to the effect that when they endorsed him, they had no idea he was going to attempt to throw out 231 years of Democracy in order to keep the Idiot Jerk in the White House.  Guess what's in his Christmas Stocking?
And, speaking of the Idiot Jerk, I understand he's raging.  He truly believe that all he had to do was follow Putin's game plan and he'd be able to make himself president for life.  He has vowed to 'fight on.'  There were demonstrations of support for his lies in a number of cities yesterday.  In Washington, a white supremacist, nut job named Nick Fuentes had his band of MAGA's chanting "Destroy the GOP," while down in Georgia the demonstrators were calling David Purdue and Kelly Loeffler RINO's.  This is what a losing failure looks like.  Looks like Santa IS GIVING them  all the gift of coal.