I hope everybody had a nice and quietly safe Christmas.  I did.  In the morning, I took a Christmas basket over to my movie friend Patty.  She's recovering from Covid.  She tested positive on Tuesday the 15th so her quarantine period is coming to a close.  Keeping safe, I stood outside on the front of her porch and she stayed in the house.  She told me she thought she had a sinus infection and went to First Care.  They tested her because she also had a slight fever and a slight cough.  She did experience some shortness of breath, but mostly she was continually exhausted.  Oh, and she didn't eat.  "It's a hell of a way to lose 10 pounds," she said.

As for myself and the dogs?  Yesterday was quiet.  They got their toys, which have already been forgotten for the most part.  I began a 5K training program on the treadmill which, in 9 weeks, should have me ready to run a 5K race.  We'll see.  The only issue I had, while slowly jogging along to a video from New Zealand, was the music, some sort of 'new age' compilation of songs composed by people who spend way too much time smoking blunts before sitting down at the keyboard.

Dinner was:  meatloaf and scalloped potatoes. And yes, I did wrap the meatloaf in bacon. 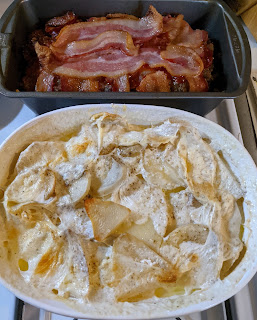 For those who took notice, we did get 2 Christmas messages yesterday, one from the exiting failed president which was in the form of a statement released by the White House, the other, a much more personal, video from the Bidens.  Think about it... a written statement vs a video.  One man spoke of how Covid was changing this Christmas, the other released a few paragraphs that barely mentioned it.  One talked to the nation, the other directed his message to a specific group in his base.  This is why America fired the dumb shit.  For him, it is all about making the deal and how it's going to effect his bank account.  In a little over 3 weeks we will be able to say good riddance to this white trash.