Sunday.  Yesterday was busier than I thought it was going to be and as a result went by fast.  I am definitely not opposed to fast days at work.  I did have some customers who were moving into a new house (for them) before Christmas and wanted new carpeting put in.  Sorry, that dance card is already filled.  Right now we're looking at installs sometime in the first week of January.

Rather than have a Holiday Party, we're going to be celebrating the '6 Days of Christmas.'  Lots of food on the near horizon, so I had to check out the calendar - I only work 4 of the 6 days.  I'm going to be their for the Mission Bar-B-Cue day, but will miss out on the sub and sandwich day.  Oh, and I'm going to be getting a little basket.  Believe me, I'd rather have a bigger basket than a smaller one, but when it comes to baskets beggars can't be choosers.

And I took a picture of myself while taking my temp at work.  Because the scanner didn't like my camera in front of my face, you can't see I was a scorching 96.7 (F).  Yeah, now you know.  I'm cold.  Been that way all of my life. 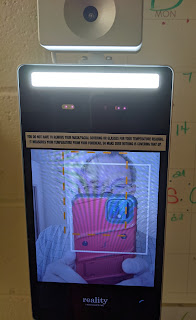 Oh, and the Idiot Jerk held another super spreader event yesterday down in Georgia.  This was after he called the Republican Governor and threw some sort of shit fit over the phone, demanding a special section of the legislature be called in order to give their electoral votes to him.  I saw an interesting comment about that phone call, referencing the Idiot Jerk's phone call to the Ukraine.  Similarities, you know?  Angry demands by a rotten loser.
And I saw where there's talk of starting to sanction the Idiot Jerk's baseless lawsuits.  Evidently there is concern they might begin to overwhelm the legal system.  Do you think he cares?  Nah.