Well, it's not quite the weekend before Christmas.  The dogs are sleeping at my feet, Biggie using an orange squeaky toy as a pillow.  If there was a cracking fireplace behind me, we could be  Normal Rockwell painting. 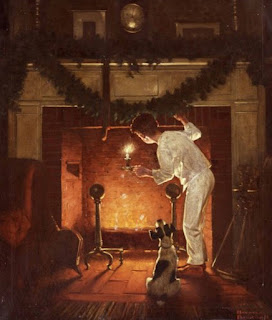 Quaint, huh?
Driving to work yesterday was fine, except for the old guy in the blue Lincoln SUV whose overly cautious driving slowed traffic down to 15 mph.  Business was slow at the store, expected, though we did get a number of customers who decided to wait until after a fairly large snowfall to buy a snow blower.  There are, no doubt, the same ones who cast votes for the Idiot Jerk in the White House.
And I don't know anybody's seen it, but the Supreme Court kicked back complaint by religious schools in Kentucky that they were being singled out in an order to keep them closed until the New Year.  Social Conservatives are going to have a real problem if the Court doesn't give them everything they want, which is why the Republicans stacked the court.  My bet is that they will be doing the dirty diaper walk for some time to come.
Oh, and the country has been hacked by Russia.  Badly.  And the Idiot Jerk has been silent.  Even though his blow bro Vlad had started tossing flirty kisses to Biden, our failed president still can not believe their 4 year bromance is over.  Not only has he been fired by America, he's being cheated on and spurned by Vlad.  How despicable.  Rumors are flying that he doesn't actually understand he's going to have to vacate the premises on January 20, that he's hunkering down in his Oval Office mancave.  He doesn't seem to understand the job of President is going to belong to someone else. Ouch.
And I understand Pence, the android, is going to be leaving the country right after the election is certified by the Senate on January 6.  Will this be an extended trip abroad while someone else packs up his belongings and moves him out of the Vice-Presidential residence?  I wonder if Mother's going along?  Is this how the abandonment begins?