Pre-emptive Pardons All Around

Oh my gosh!  I slept late today, perhaps because I had a busy day yesterday, that included a bike ride in Flanders.  There was laundry, too, and a walk with the dogs, and some time with the aquarium.  The later entailed a quick trip to my local PetSmart.  While changing the filter, I discovered my inline heater had stopped working.  After adjusting the temperature a few times, and uttering a few salty son-of-bitches, I realized I needed a replacement.  Rather then purchase another inline heater as that involved water issues, I chose a standard in-tank model.  Now the fish are warm and happy.

We had snow last night. 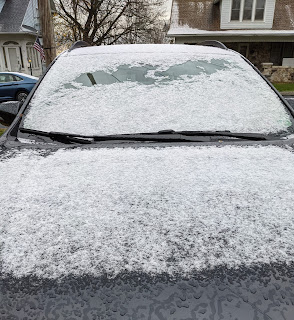 A big Congrats to Elliot Page.  Over time he has become more and more politically involved, so I would not be surprised if his future isn't destined to be in public service.  I can see him as a very vocal senator.
And there are a lot of headlines swirling around the possibility of the Idiot Jerk in the White House handing out a boatload of pre-emptive pardons.  Evidently there is some precedent in that Ford pardoned Nixon before charges could be filed.  Blanket pre-emptive pardons don't work.  He can't just hand them out to his three oldest children, and squirmy faced Jared, like Christmas presents.  And Sean Hannity has recommended he pre-emptively pardon himself... from what?  You'd think the Republicans had put some crime family into the White House. (Can you hear me laughing?)
And Billy Barr says "no fraud!  no fraud!" (I'm still laughing.)  The fact that Billy through his boss under the bus has more to do with saving his own skin then anything.  In case Billy hasn't realized it, he just shit away his pre-emptive pardon.