My weekend is over.  That's right, I get to go back to work... today.  If I didn't like getting my paychecks so much, I'd go part-time, but let's be honest here, that deposit into my accounts every 2 weeks is really rather nice.

One of the unfortunate things I'm going to need to do this morning is do my daily Health Check.  You'd think that by now going on line and filling out a very short survey should have become part of my routine.  It hasn't.  Even though there is a post-it note hung from the bottom of my monitor, I sometimes forget. There must be some sort of Freudian slip happening.

I received an email yesterday stating that my treadmill had reached its 'destination city,' which is apparently Middletown, which is about 17 miles away.  According to the information they gave me, Estes should be calling to set up a delivery date.  Will this new piece of equipment be here before Christmas?  That would be nice.  I'm off on the 24th and 25th, which would give me time to get it assembled.

And for those with an interest, here's a pic of my winter tree.  I have a set of miniature skis coming tomorrow, and next to be ordered: a hockey puck and a 2 different sets of ice skates.  What really stands out right now are the snow flakes and the big balls... oh, and the fact that I haven't decided what I want to use as a tree skirt. 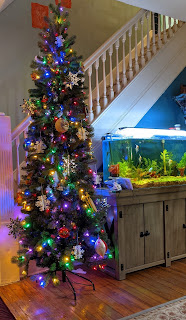 Of course, there are other flakes in the world besides the snowy kind.  Ken Paxton, the AG from Texas is good example.  He's ignoring the state courts and taking his suit against the 4 battleground states directly to the Supreme Court.  16 additional Republican AG's have jumped on board?  Woah, we have a bit of a storm brewing here.  I understand the Idiot Jerk in the White House has asked another Texas Flake to plead their argument should the Supreme Court decide not to just flush this turd.  They don't seem to understand how big of a failure this will be if the Supreme Court they desperately tried to stack chooses not to hear their claim.  Ouch!