Being the ever vigilant person I am, the first thing I did this morning, after letting the dogs out and brewing a pot of coffee, was check the weather map.  Here it comes, somewhere between 3 and 8 inches.  That's during the day.  Because weather forecasting is always a gamble, there is no precision.   Tonight they're calling for an additional 10 to 18 inches.  About the only thing they're fairly certain about is that our precipitation is going to be in the form of snow.  No one has the temps topping 32 (F)  My shovels are anticipating a decent workout when the snow finally arrives, sometime between 10 and noon. 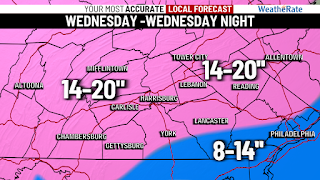 And I saw that the residents of Palm Beach  don't want the Idiot Jerk to make Mar A Lago his permanent home.  Their attorneys (yes, they have attorneys) have said that since he turned it into a private club it can no longer be used as a residence.  They listed a lot of complaints about his living there, though no mention of his stench.  They don't understand all of his encroaching legal problems will most likely keep him abroad.

Everyone is wondering if there will be any rhyme or reason to his last 30 some days in residence at 1600 Pennsylvania Avenue.  Don't count on it.  His dearest blow bro Vlad congratulated Biden.  I'm betting that had the Idiot Jerk sobbing into his pillow, "he hates me!  he hates me!"  One thing you can count on, he will be disruptive and destructive, but then his intention was never to leave the country in the pink.  Rather, he intended to dictate and dominate, and those plans have been thwarted.  Now we have to work on eliminating the rest of the Republican swine from public office.  Our work has just begun.