So, yesterday was my day off and I had a few chores planned, mostly I wanted to work on painting the trim in the exercise room and the hallway.  I was upstairs moving things around when the dogs began barking... loudly.  They do that when someone walks past or a FedEx or UPS truck stops at a nearby house to make a delivery.  And then my doorbell rang.  Surprise!  My treadmill had unexpectedly arrived.  There was supposed to be an appointment... that never happened.  The tall, skinny guy who delivered it said it weighed 300 lbs, I corrected him 232 lbs.  Oh, and I had to help him get it up on the porch, and with his help, I pushed it into my living room. 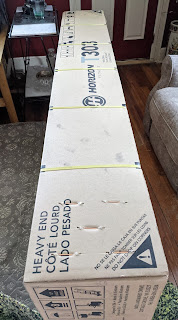 Justin's coming over this morning to help me carry it up the stairs.  And, I've decided I'm going to take the day off.  I want to get it completely assembled, and maybe get a jog in.  Business has been slow.
Of course our skies were filled with clouds last evening so there was no viewing the bright planets.  A friend from Arizona posted a picture and you saw two specific points of light, not one, which means this was a lot of hype.
And I saw where Pat Robertson, who once said the Idiot Jerk was going to be re-elected and that would start the end of days, now says the Idiot Jerk should concede.  That man is an old fool and should keep his mouth shut.
Oh, and we're getting a teeny, weeny check from the government.  While I don't really need the funds, there are many who do.  The Republicans don't really care about them, only themselves.  The problem is too many of them are old, and too many are two wealthy.  These people need to be excluded from the election process since they only seek to serve themselves.
Posted by Dave R at 7:52 AM