Well, we aren't really super pink.  That monster snow storm?  The one where Central PA was the bullseye in the epicenter?  That little pussy cat was anything but epic.  Oh, sure, we did get a lot of snow, but no where near 24 inches.  20 inches?  Nah.  At best we ended up with around 10 inches of light, fluffy snow.  And here I was planning on taking a personal day.  Well, it looks like that's not going to happen.  This is what it looks like from my front porch. 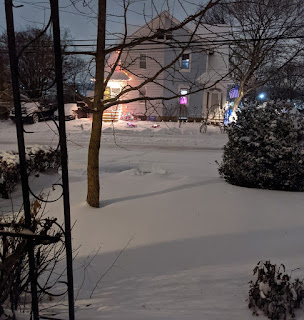 I did get an email from the people delivering my treadmill letting me know there was a possibility of it being delayed.  How could it be delayed when they haven't even called to set up a delivery date.  The location upstairs is ready and waiting, however, I'm betting I'll have to wait until after Christmas, unless they can get it here on Monday or Thursday.
Those qanon Cracker Jack Crazies are so pissed at Moscow Mitch they're threatening to leave the GOP.  Personally, I don't think their numbers are that great, but let's be honest, any loss for the Republican party is a gain for Democracy.  They don't understand their trendy conspiracy theory, the one where their Idiot Jerk is holy will fade.  Time will bury them in obscurity... something they truly deserve.  Four years from now they will be nothing more than an embracing race track on the dirty underwear of the GOP.
And what about all those who don't want to take the Covid Vaccine?  This is how evolution works.  Those who can adapt survive, those run around shrieking "what's in it?"  They'll die off.  Sure it will take a little time, but that's how it works.  Here today, gone tomorrow... or maybe the next day after that.
Posted by Dave R at 6:51 AM