Today I have the early shift, opening the store.  After today I will only have one more left.
Yesterday was busy - it was my day off, of course.  At 0720 I had the old ticker checked out since I'm planning on getting back on the bike much more regularly, and I'm not as young as I use to be.  Went to see my Mom... much confusion there, as far as I know I have no other relatives who have suffered with dementia.  My sister thinks that sometimes she fakes it just a little bit to get attention.
And the Idiot in the White House signed another executive order... and blamed all of the protests on Delta airlines.  I have no idea how someone so damn stupid could win the presidency.  The sad thing is that this is only going to get worse, not better.  I had been praying to all of the gods in the Universe that he not be as crazy as we all feared.  It seems all they've been able to do is shrug their shoulders in despair.  Perhaps it's their way of saying you can't perfect stupidity any better than DT.
And, of course, 2 days ago, back on Sunday, I had to deal with a customer who was running neck and neck with DT in the stupid department.
I was discussing credit goals with one of my cashiers when a woman, looking very churchy in her royal blue cloth coat, walked up to me and said "I need some help with a key problem since you're having an unimportant conversation."    ...I'll let that sink in a while... that's right, she actually said, that I was having an unimportant conversation.  Before I could respond she walked over to the key kiosk where she picked up an inexpensive lock and explained that "I need you to change this lock so it will fit this key I have."  Now while we did have one associate on the clock who could do what she asked, I was not that associate.  She's about to get hit by Karma... can you feel it coming?
I smiled at her very nicely and said, "the associate who does that is at lunch right now, if you want, he can rekey that lock and give you a call when he's finished." 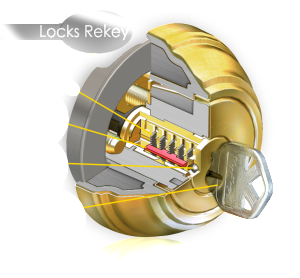 Of course, she didn't like that answer.  In fact, she hated that answer.  She hated it so much she threw the lock at the kiosk and furiously shouted "that does it!" before storming out of the building.  Thinking back, I'm sure my response must have made her feel very... unimportant (karma).