So, I was off yesterday and, of course, it rained nearly all day.
Oh, and I have a cold.  The sniffles started on Thursday, yesterday was runny nose and cough day.  This morning I went out and bought some Mucinex.  Since I don't get sick that often, I have no over the counter meds in my house.  Now I do.
Yesterday was also the day DT was sworn into office.  There were some serious protests, though I don't know why they had to attack the McDonald's, that didn't make anybody's point.  Sadly, there were no flaming bags of shit thrown at his car.  That would have been wonderful.
And I didn't listen to his inaugural address, though I read through the putrid thing later.  George Will, from the Washington Post thought it was bad as well; rehashed campaign rhetoric and nothing more.  And then there was the bit where he channeled Bane from "The Dark Knight Rises,"  DT plagiarizing a Super Villain, now ain't that sweet.  A number of websites were again calling him "Don the Con," which I do feel is very appropriate.  You see, it's only a matter of time.  He say's he's going to strengthen our military, but... well... what would Vlad think of that?  America with a very strong military?  Nyet.
Any way, to help make the the achey, sneezy, runny nose day seem not so bad, I went shopping of Amazon and ended up buy a sound bar for my TV. 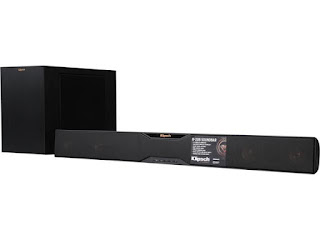 Because I'm an Amazon Prime member it's arriving tomorrow, and guess what?  I'm off work again.  Ain't that just dandy?  It's a Klispch, just in case you're wondering, and supposed to be, according to all of the reviews I read, rather good.