So, are we ready for DT to try and set up a dictatorship?  Of course, they're trying to make this whole thing sound rational and, I'm sure, to his Trumplodite hoards, everything makes perfect sense.  But not to the rest of the country.  There were protests all over the place yesterday in regard to his most recent ban.  And they will continue.  And the GOP doesn't seem to be objecting... much.  But then why should they, for a long time they've been praying to get such a person in the White House: a 'take control' sort of guy, who has no problems stepping on civil rights, or the constitution for that matter.  And they have absolutely no idea what they are doing, or how bad both the world and a vast majority of Americans think they are.  To paraphrase DT, he and his administration are bad, bad people.
And why is he in power?  Because complacent voters thought for sure Hillary had it wrapped up.  Well, she didn't.  Because they thought their vote was unimportant, because they thought she was the sure thing, America's racists crawled out from under their rocks and voted in droves.
I suspect things are going to get very bad.  I wouldn't be surprised if at sometime he doesn't attempt to suspend elections to maintain his power.  In the end, he will, no doubt take up exile in Russia.  Everybody needs to tell Donny to shut up!
On the brighter side, I've once again set up the CompuGymMusic Room.  This is what a friend of mine called my work out room back when I was working out on a regular basis.  This is what it looks like: 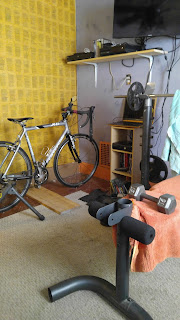 Yesterday I did free weights, and today some time on the bike.  Things are looking good, at least here.  The rest of the USA is on its way to hell.