Revolution is a Liberal Concept

I went to see "Rogue One" last night and was... surprised.  Where as the original "Star Wars," Episode 4 as it is now called, was a Space Western, "Rogue One" is a Space War movie and is, without a doubt, the darkest chapter in the "Star Wars" saga.  The first 6 films were kid friendly with cutsie aliens, and though this latest chapter has aliens they are not cutsie.  "Rogue One" is a movie about revolutionaries, and their revolution, as are all, is bloody.  There are no adorable aliens designed by the marketing department here.  And it is good.  Instead we have freedom fighters who will assassinate if need be, who will sabotage, who will strike at anything and everything they believe to be evil... ie The Empire.  There is no neat and clean Millennium Falcon in this movie, or space slugs, or cafe scenes in this movie. 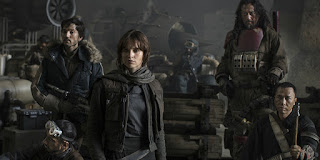 And as I was driving home afterwards I started thinking about Revolution and those who create it, and those who join up, and those who fight against it.  Even though many, many conservatives would like to put their label on our Founding Fathers, those men were anything but conservative.  Revolution is a liberal concept.  During our revolutionary war, the true conservatives were the Tories and the Loyalists, who did not want change, who wanted to remain steadfast in their loyalty to the throne.  If you don't believe me just look at our constitution.  "All men" is all inclusive, liberal and even today, revolutionary.
"Rogue One" is a revolutionary film which is far from happy.  Characters you care about die.  They sacrifice their lives for a cause which they believe is true.  This a movie about fighting back.  Millions of people in America have gone to see it and for many, I suppose, a bit of an awakening.  "La La Land" may have won a shit load of awards at the Golden Globes, but "Rogue One" may end up being the most influential film of 2016.
Posted by Dave R at 8:00 AM