Well, it looks like the Honeymoon is over.  Many News organizations (except for Fox) are beginning to cite this new Quinnipac Poll in regard to failed President Elect's popularity.  Some are calling his serious drop in ratings 'buyer's remorse.'  Me?  This is how Karma works.  Karma is not only about revenge, though many believe so, it is more concerned with fixing mistakes.  If your Karma is bad and you survive, you will become a much better person.  And Karma is a 2 sided blade:  Hillary had to lose in order for Trump to win, and Trump's Karma is so bad.  His bad Karma has encompassed and overwhelmed the bad Karma of the Republican Party and these mistakes need to be fixed.
He fooled a lot of people with his phoniness, but he's been phony for years and nobody cared.  Many though he was entertaining, a Reality TV Star infused with almost total irrelevance... and now he's our President Elect.  Now, in the morning when people are looking at themselves in the mirror while they brush their teeth, they're going to pause and mutter "oh, shit."  This is their Karma.  Our Karma will make us stronger.  Trump's Karma will...  well, get out the clown face. 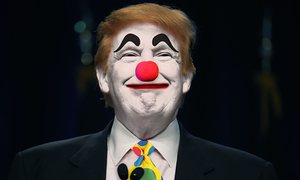 He should know things are going south when his nomination for Attorney General says Trump's comments in a 2005 tape amount to 'sexual assault.'  Ooops.  And other news, whether fake or real,  which says that the Russians have enough dirt on him to blackmail him in to doing what ever they want?  Believe me, that's not even the cherry on top of the sundae.  His ratings are in a leaking submarine heading into a dive.
Will we survive as Americans?  Of course, we have broad shoulders, we have strong backs, we are not as stupid as Donald Trump.  Will he survive his Karma?  Nope.  When he won the election his Trump Train veered into a long, long tunnel... that's blocked by a landslide.  Things are only going to get darker for him.  This is his bad Karma.