Yesterday I got my hair cut short.  Short means fewer visits to the barber, though yesterday's visit was a bit surreal.  My barber yesterday was a middle-aged, tatted man who I saw, when he smiled, was missing some teeth.  Shortly after he had begun trimming with a scissors, he told me that he had gotten to work late because his son had been suspended from school, and he had been the one to pick him up and take him home.  The reason for the suspension?  His son had made a video of himself destroying school property and posted it on TikTok, part of the 'delicious licks' trend.  My barber proceeded to tell me that he also knew a lot about bad kids, since he had been one, having gone to jail 3 times (that's right, he told me he had been in jail 3 times).  And what did I do?  Laugh.  Seriously, for all his seriousness, he was funny as hell, and he knew it.  He got a nice tip. 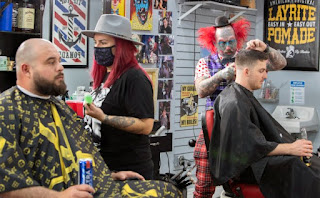 My laser printer is now working again.  It took a tech from Microsoft to tell me what I already knew, that one of their recent updates had turned off certain printing aspects.  That was amusing, too.  He was remotely working in my laptop trying to find the problem while I chatted with him.  He say he was going to try something and I'd say that I had already tried it and it didn't work... and he tried it anyway.  He ended up reverting to the previous version of Word installed prior to the update.  I could only wonder how many others that update had effected adversely.

And, of course, the political hacks of the Supreme Court have decided to take up the Mississippi abortion law on December 1, which means we should find out their decision next June, right before the 2022 midterms.  Will there be a yea or a nay for Roe v. Wade?  Republicans are hoping for a nay, believing such a decision will flood the polls with happy conservatives.  You see, they still believe in the 'silent majority' spoken of by that dolt Reagan.  Such a decision will only hasten the demise of the Republican Party and emblazon the moniker 'political hack' in every mention of Alito, Thomas, and Barrett for eternity because they completely denied the necessity of having a Centrist Constitution.

They will never learn. Vote Blue.