Good Morning, or Afternoon, or Evening, or whenever.  I say that because time has changed for me because of my lumbar issues.  Now, every night around 2:30 AM EST, I get up to use a heating pad for a half an hour.  That's not as big of a disruption to my sleep patterns as you might think, since now and then one, or both of the dogs, needs to get in an early hour pee.  Besides, the older I get, I find that the hours I sleep are less important than the total hours I sleep.  And I don't just sit like a dolt for that half hour, I watch videos, listen to music; there's nothing wrong with making that half hour productive.

Yesterday I got a walk in on my treadmill.  Walking is good for lumbar issues, I will do so again this morning.  I'm thinking of activating 'dictate' in Word, so I can walk and write at the same time.

I am slowing turning the space around my writing desk into a home office.  This means no longer using the bottom shelf of my sideboard for storage, and my laser printer.  Prior to being useful, I used that space primarily for displaying some of my china.  Now, all I need to do is figure what to do about my leaning candles. 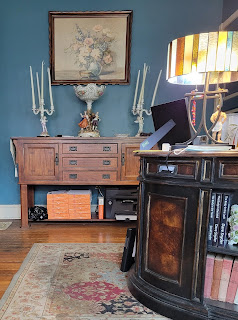 And, of course, one of the headlines I saw while using my heating pad this morning was in regard to the California recall.  You all know now that Newsome kicked Larry Elder's ass by a whole bunch of votes, or basically what they call a landslide, something like 64% to 36%., so it looks like he's going to be staying in office. This time the polls were correct.  Honestly, I wasn't worried.  Elder's nothing more than a craven Oreo trying to mold himself after the Orange Anus.  He was preparing to shriek 'voter fraud' however, after such a resounding defeat that lie would make him look like an even bigger ass than he already is, and he's already a fairly large buffoon.
Finally, here it is Wednesday and I'm still seeing pieces about that hack Amy Barrett something or other.  I don't know why she thought her little speech was a good idea, perhaps to rationalize the lie within her head.  What she did do, more than anything else, is prove to a majority of Americans that she's not only a hack but a toady as well.  She is one of many poster children exemplifying why Republicans need to be voted out of office.