Okay, so my weekend has just begun.  My back is only slightly cranky.  The temp is a crisp 59 (F), so I have some windows open letting in the cool morning air.  In a few days we'll hit the Autumn Equinox and fall will be official.  Interestingly enough, here in Central PA, we have one of the longest fall foliage seasons because we're smack, dab between the north and the south.  Occasionally we get bright, brilliant colors, but mostly we're rather subdued. 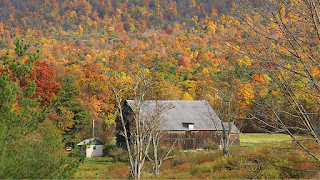 I did an adjustment to my work availability.  They can schedule me Monday, Wednesday, Friday, and Sunday.  That way I'm guaranteed a day off between shifts.  The way it had originally been set up in the system, it was possible for them to schedule me 5 days in a row.  That's not why I'm going part-time.

Last evening, when I got home from work, I updated the drivers in my printer.  Evidently a large update happened back in March and I didn't receive notification.  I didn't try printing anything yet because, well, honestly, if it doesn't work I'll just have to get another laser printer.

If the barbershop is open today, I'm going to get a haircut.  Believe me, I need one.

Here are some tasty tidbits of information:

For years we've been told to hydrate, hydrate, hydrate.  Drink 8 glasses of water a day.  Now they've discovered hydration is different for every one.  8 glasses might be too much for some people, and not enough for others.  I read this and thought, hell, this is what happens whey you try and standardize everything.

Most of us with event the slightest bit of savviness have know this next one for a long, long time.  White, Cracker Jack Crazy Christians are really in it for the power.  Even though they might claim they're working for a higher power, the dark secret in their hearts is that all they're concerned about is the power to dictate and control.  Oh, and many believe in white supremacy because they they've convinced themselves they have chosen.

And finally. the Hillsborough, Florida GOP have a bit of a problem.  It seems their anti-vax, anti-mask bookkeeper was a software developer who wrote the application for the finances.  Unfortunately, he was wrong about the vaxxing, and the masking, and died of Covid last week without telling anyone how to access their financial information.  Ouch!!