Yesterday was very slow at work.  And, as usual, the day ended with rain.  That's right.  We got more rain.  Storms that turned into momentary downpours, and then drizzles well into the night.  And today as well.  And tomorrow, too.  Yesterday at work someone else mentioned that we were turning into a rainforest.  Our visions are dissimilar in that he pictures people kayaking up streets and trees on rooftops, while mine had more do with continuous rainfall and swarms of mosquitos.

I saw where Amazon is raising  the starting rate for many of its workers to $18 an hour.  I don't know what positions are covered, but if that's true, something's changing.  Our starting rate of pay falls short of that mark.  Some of our positions do hit the $15 per hour, but most do not.

And Space X launched civilians into space yesterday.  The ticket price was hefty, but they can afford to spend the money.  Space tourism.  Who would have thought?  Serious exploration is not far off.  China wants to put men on the moon.  Russia's talking about building their own space station (the Chinese already have one in orbit, though no one talks about it).  India is launching probes to Mars.  This is our future. 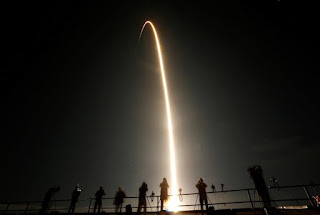 And what about Nicki Manij?  I know the name, that's about it, but her anti-vaxxer stance, relying on some sort of conspiracy shit about one man's swollen testicles demonstrates stupidity at it's worst.  And now she's laughingstock, which might not help her career much.
Another amusing bit is that out in California Larry Elder conceded his loss rather than rely on a variation of the Bit Lie.  This does not make him any less of a loser, however, the really big loser was the Orange Anus who was desperately hoping to damage the Democrats.  Because of the Republican's failed recall, Democrats now have a decent playbook on how to beat them in 2022, other than just stomping the shit out of the Big Lie.