Holy Crap!  Can you believe it!  I have another Weekend in a Day!  Were I a Cracker Jack Crazy I'd shriek "what a blessing!"  I am so glad I retain my sanity, an action that is rather easy since I'm neither a lemming, nor a fool, nor desperately trying to bend the light of reality round this little orb of humanity I call Me.  Clear headedness is quite common among those of us capable of comprehending that we are not little conservative robots, and while we might show allegiance to our duly elected government, we do not bow down to any man.

Oh, dear, can you tell I've had my coffee without cream this morning?  I'm fasting.  In a little over an hour they will be drawing blood for my annual physical.  Usually they take 5 vials, 4 for testing and 1 to observe the wonderment of my DNA...  At least that's what I like to tell myself.  And I will also pee in a little plastic cup, so they can smell the coffee without cream as they look for whatever secrets my urine might be hiding.

After that, I'll come home and eat an egg salad sandwich.

There's also a pepper plant which needs to be planted, as well as cucumber and cantaloupe seeds.  The last two are going in the ground this year.  Last year, I tried the cucumbers didn't do well in a big pot.

We're also supposed to have rain later in the day.  There's a 72% chance.  Oh, and I have flowers on my tomato plants. 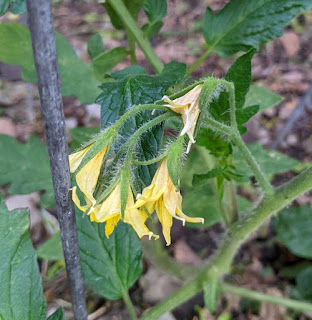 Yesterday, I read in The Hill that there are those who believe Loser #45 will run in 2024.  Personally, I think that all depends upon those states who are trying to change their voting laws in order to guarantee him a victory.  They're also predicting he's going to lose.  I don't think that he'll run.  He wants to be the power behind the dying Republican Party.  He'd rather put a puppethead in his place, rather then face a full frontal attack.  You have to remember, not only is he a lying sack of shit, he's a coward as well.  That way, when the loss occurs, he'll be able to blame someone else.  He likes calling other people losers.  Standing in front of a mirror and seeing that truth reflected back at him is too much for his tiny ego to bear.