Today's Wednesday.  The weather's supposed to be nice, a little cool, but sunny, and of course I have to work.  Tomorrow I'm off.  Same forecast as today, though 3 degrees warmer.  I can deal with that.  There is much lawn work needing to be done.  This is fine.  I don't mind working outside.

Yesterday, while I was putzing around with my roses before going to work, I noticed something small moving through the grass towards the mounds of dirt where I planted my cucumber and cantaloupe seeds.  The movement stopped by the side of the cucumber mound.  Looking down, I realized I needed to get the dogs in the house pronto, and hurried them in through the back door.  Why the rush?  Because they would have seen this little guy as a toy, and one of them might have swallowed him whole, and that might not have been a good thing because these little guys are not always good eatin'. 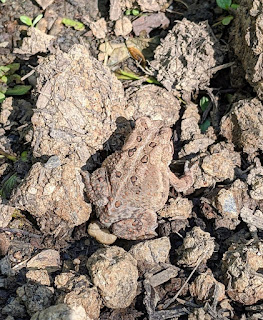 And, of course, the Liz Cheney revolution is almost fascinating.  I don't think people understand how very rare it is to see one lone individual completely destroy a political party... and I'm not talking about Liz.  The ugly truth is that without Loser #45, this party has nothing.  In 2020, they used their 2016 platform without making any changes because they had nothing.  Their heart and soul is nothing but The Big Lie.  They're trying to throw shit at Biden and finding out nothing sticks.  I saw this in the Signorile Report, and found it fascinating.  Evidently Failure #45's disapproval rating is still a lot higher then his approval rating.   His 'blog' is not setting fire to the Internet.  Without him, they are nothing.  With him, they are worse then nothing.  And Cheney is preparing to take a blunt ax and wack the shit out of the GOP.  You see, they ate their little toad, and only now are discovering he's poisonous.