Holy Crap!  It's Tuesday!  Don't time fly.  Seems like only yesterday my weekend began, and now it' over. Still, I will admit to getting much more done then I had been expecting.  I even managed to get the lawn mowed.  This is the 2nd time I've mowed it during a drizzle.  And, let's be honest, it's not as though I need to worry about shrinking.  I was sanforized a long time ago.

Another loaf of wheat bread was baked yesterday, and once again it's delicious.

A few more aquarium plants are arriving today.  The rest of Baby's Breath is going to be tossed into the compost bin.  There was nothing in the description about the plant overwhelming a tank.  Nor was mention made of how that mass of teeny, tiny leaves gathered large amounts of uneaten fish food.  The last one I pulled out weighed in at 12 oz and was about the size of a basketball.  This one is almost as large.  Soon the fish will have more space to swim.

And I have lots of baby peaches! 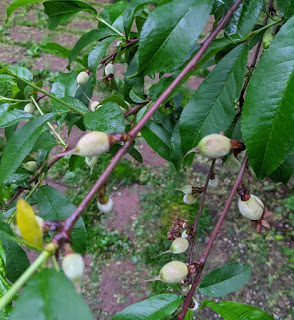 And isn't that Liz Cheney a pistol!  One of my news feeds called her a pain in the GOP's side, they were being kind.  The far, ugly right hate her.  She's refusing to bow down and worship the sphincter of Loser #45.  Don't be confused, however, she's not speaking on behalf of Centrists, and Independents , and least of all Democrats.  Nope.  She is the voice of that 9% of Republicans who broke away the Insurrectionists.  Without those votes, while they might win local elections, they'll never get into the Big House...again, and that sets their butts on fire.  Ouchy.
Oh, and one of the things trending on Reddit this morning was "Josh Hawley is Pro-Hate Crime."  This is a party that's in a pond of deep shit, and instead of trying to get out, their simply diving deeper.