The forecast for today calls for overcast skies and drizzle... for the entire day.  I cannot believe it's May 30 and my freaking heat is on.  According to my outside thermometers, the temps are holding steady at a chilly 50 (F).  Tomorrow, temps are supposed to rise into the low 70's (F), which will be nice.

I slept in turns and fits last night, not so much because of life, though life has definitely has had a bit of an unending; routines continue.  The early riser in me will continue to rouse the dogs before the sunrise, though not as early as today.  The issue was bread.  I finished off the last of my Italian bread last evening and needed to bake a new loaf.  I decided to use the timer on my new bread maker.  Of course, shortly around midnight I woke up wondering if I'd set everything correctly.  Was I going to wake to freshly baked bread?  Son of a bitch.  So, I got out of bed, went downstairs, and checked the timer.  Looked fine to me.  However, as soon as I got in bed, that issue once again began preying on my sleep.  So around 0445 I got up and made coffee.  About 20 minutes ago I popped this baby out of the bread pan.  This is what you call Fresh Italian. 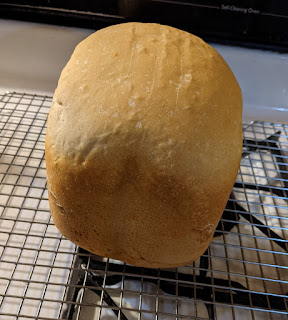 Fresh is very good.  Unless you're a Republican.  They keep trying to serve up their Big Lie and the only ones foolish enough to eat it are those who... for lack of a better word, are simply senseless.  They have wrapped themselves so tightly in the strings of their own bias no blade sharp enough to cut them free exists.  Look at Texas.  Those white Republicans are set to unleash some of the tightest voting restrictions in the country because they believe their laws will keep minorities from voting.  This is desperate whiteness from a group who is simply not making enough babies to survive.  They do not understand that sooner, rather then later, the shoe will be on the other foot and the only thing their going to be getting is a stale, moldy crust.