I know it seems to happen every day, but today is my Friday.  Aren't you glad I'm not responsible for calendar updates?  If that were the case, every day would be Dave's day.  Of course, that would be confusing as hell since half of the time I, myself, don't know what day it is.

While there are many who still wear masks when they come into the store, there are many who don't.  Those of us who are fully vaccinated, believe most of those maskless shoppers haven't been within a mile of vaccination station.  Everyone I've talked to so far, hopes they get sick and spend 2 weeks on ventilator.  As more people get vaccinated, the chances of that happening go down since there will be fewer infected people wandering the face of the earth.

An Italian group named Manneskin won Eurovision.  I listened to the song.  Meh.  I suspect this year's competition was rather weak thanks to Covid.

My cucumbers and cantaloupes have sprouted!  Hopefully this year I will get some fruit. 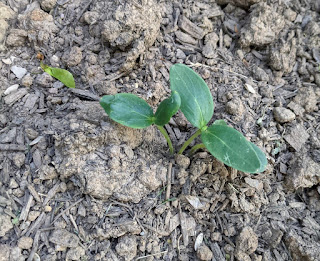 And sine of my rose bushes are in full bloom.  I did send another picture of my roses, but either Gmail is having a problem, which wouldn't surprise me, or my phone didn't send them, which also wouldn't surprise me.
So, does anyone know how you turn a Red state Purple?  Or a Red state Blue?  The answer's rather simple.  First, you let the Republicans of that state vote to have the ballots audited. Secondly, you watch as they hire Cyber Ninja.  After that everything is easy peasy.  All you need to do is look at Maricopa county in Arizona.  Or, Fulton county in Pennsylvania, for that matter.  You see, Republicans can not believe they're losers, no matter how badly they lose an election.  They are so caught up in the wonderment of their own bias, anything other then victory has to be fraud.  And so they lie to themselves, and look for bamboo slivers.  They don't understand that is not the scent of truth they smell, rather, their corpse is beginning to stink.  I never thought I'd end up taking my mask off to smell this.  Of course, those states will all need to buy new voting machines.  We are all going to pay the price for their stupidity.