The truth about Trail Ridge Road

So, how am I going to celebrate my Saturday?  My day off?  Well, there's laundry that needs to be done.  I don't know,  but for a single person I seem to wash my duds a lot.
Oh, and I'm going to go to my neighborhood Giant.  Occasionally I will stop in at my neighborhood Weis Market, but not so much now that they too no longer carry the 31.1 pound bags of Beneful.  That's how Purina makes their fiscal plan, give you less product and charge you the same price.
A bike ride is planned.  Yesterday I checked out Trail Ridge Road... it's 20 mile ride... all uphill!  Son of a bitch! My speed was a little over 8 miles an hour... I rode for 40 minutes... do the math.  It's in the Colorado Rockies.  This is what it looks like in the summer.

Oh, and they get snow there...  Here's a pic of Max cycling in the snow. 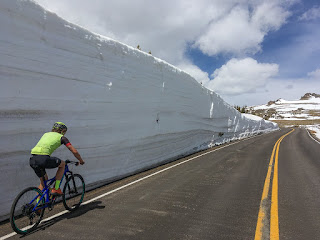 Of course, it isn't really Max, he's a fictional character, but you get the idea.  Speaking of Max, Louann Pomfrete, proprietress of the Rattler's Den Reptile and Snake Emporium has just told Eli that "sometimes God blesses us with a smart-ass just to prove He has a sense of humor."
Oh, and Bob posted something funny about Anthony Perkins and his views on evolution.  As an Evangelical shit bag, Anthony doesn't believe in evolution.  Nope, in his small mind nothing changes.  He is in deep denial even as the human species is fully demonstrating the evolutionary process.  Dominant genes are asserting themselves in regard to eye and skin color.  Anthony would rather read his Bible than educate himself on genetics because... well, genetics is saying he's not as superior as he desperately wants to believe.  He loves his ignorance.
Posted by Dave R at 6:43 AM