So, Boris Johnson lied to the Queen of England.  My phone's been buzzing with notifications for the past 5 minutes.  You do know she's going to shake her finger at him.  Naughty Boris.  So much desperation trying to create the old empire, so much hatred for change.  He lied to the Queen.  Every media outlet in the world is pointing at him and laughing.  History will remember him not as some noble man who led the UK out of tyrannical EU, but rather as the buffoon who lied to the Queen.  For Boris?  This is a bad day in Bedrock.  This is a very rude awakening to Boris and his Brexiteers:  their shit stinks.
And then there is the Idiot Jerk in the White House.  According to the Wall Street Journal, 10 days before the Idiot Jerk made his now infamous call to the Ukraine our own Moral Degenerate froze $319 million in aid to that country.  These funds had been approved by Congress to help the Ukraine fight Russian aggression.  You know?  Russia?  When the Idiot Jerk's Blow Bro Vlad lives?  Because the Idiot Jerk is terrified he's going to lose the election and go to jail, he wanted dirt on Uncle Joe.  So much so, he resorted to...(are you ready for this?) Extortion.  For those who don't know what the definition of extortion is, this is it:

Extortion is a form of theft that occurs when an offender obtains money, property, or services from another person through coercion. To constitute coercion, the necessary act can be the threat of violence, destruction of property, or improper government action.

The emphasis being on 'improper government action.'  For those who paid any attention to the Idiot Jerk in the White, this type of behavior pattern is pretty much the norm.  That's right, he's an asshole.  They're asking he release the transcripts of that phone call.  My money says he's going to turn into Tricky Dick Nixon and have his personal Rosemary Woods make it disappear.
Did Boris extort the Queen?  Nah, he just lied.
And, finally... my GoPro came yesterday.  It came directly from GoPro.  The price was only $20 more than what I had paid for a model that was 3 years old. 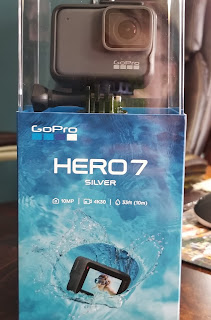 I've already been playing around with it.  I had also bought a number of mounts so I can stick it just about anywhere.  One of those that was included was a strap to attach it to my helmet.  Hhhmm.  I wasn't too wild about that, so I ordered a mount for my handlebars.  This might sound odd, but I want to be able to see where my camera is.  No lie.