Here it is... Monday, not really Labor Day since that holiday used to always fall on the first Tuesday of September... does anybody remember that?  For about half of the American workforce, it doesn't make a difference since their positions are service related.  I'm one of that group.  While some of you are working 32 hours and getting paid for 40, I'm working 40 and getting paid for 48.  Holiday pay, you know?  I'll bank the extra cash... that's what I usually do.
One of the things I did while lazing around this morning was watch the UCI Mens Downhill Mountain Bike Races from up near Quebec.  They cover about 3.25 miles in a little over 5 minutes riding through places like Le Bois Sans Nom and through boulders and at one stage over a 15 foot cliff.  These guys are nuts.  I didn't watch the women's race, but I can tell you they're just as crazy.
I was down in York, PA yesterday visiting my friend Betsy.  We had lunch at one restaurant but had desert the Lyndon Diner.  It's owned by Greeks and they make their own pastries.  Simply delicious.  I had a scrumptious pastry with an even more scrumptious cheesy filling doused with some sort of liqueur. 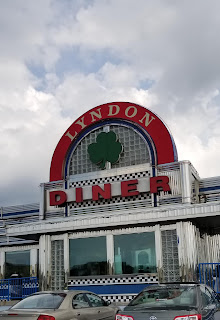 As we were eating, I said to her that most Conservatives considered Greeks a minority group simply because of their dark complexion.  That's odd if you think about it, since they gave us Democracy.  We also talked about how Conservatives keep talking about bringing jobs back to the USA without understanding prices would have a drastic increase for that to happen.  They balk at a $15 an hour minimum wage, hell, people are going to want way more than that if you expect them to start putting iphones together in this country.
I guess Dorian has dropped down to a category 4 but has also slowed down.  He's trying to decide where to go next.  Maybe he's waiting for the warm waters to build up his strength.
Well, it's time for me to get my ass in gear.  I've got to hit my neighborhood Giant so I have fruit for my lunch next week.
Posted by Dave R at 12:21 PM