I slept in till 0500!!  And I slept well, only one bathroom call during the night for me, there were no trips downstairs to let the dogs out.  Sometimes that doesn't happen.  Lily's the one who will sit by the bed and quietly let me know "it's pee time."  That usually happens about an hour and a half after I've turned out the lights.
My GoPro arrives today.  Most like the deliver will occur this morning.  Originally scheduled for between 0800 and 1230, UPS change the time to "by the end of the day."  I just looked, my new toy is listed as being "out for delivery" and it's a little after 0600.
Before I left work yesterday, I picked up bags of moss and perlite to use for wintering my dahlias.  I live in the 5B temperature zone:  winter temps can drop to -5 - 0 (F).  That's cold enough to kill them.  This means storing them in a box in a cool, dry place until early next spring when they will once again be planted outside.  I also picked up a bag of allium bulbs.  Supposedly there are 30 of them in the bag.  More spring and summer flowers! 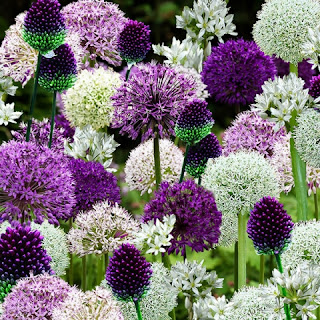 And, isn't this whistleblower crisis interesting.  The problem for the Republicans is that they desperately want to hurt Uncle Joe.  They see him as the biggest threat to the Idiot Jerk in the White House.  In fact, can't you just hear that scumbag shrieking "dirt!  I need dirt!"  Yeah, that sounds like him.  Just as we can all see him holding up a $250 million aid package in order to get the new Ukrainian president to give him the dirt he so desperately wants.  How Republican.  No ethics, no values, phony to the very end.  His approval rating never gets above the mid 40 percentile. his disapproval rating meanders from the high 50's to the low 60's.  The only thing a majority of American's give him any credit for is the economy... which is teetering.  Since he has nothing to really show for his first 3 years in office, his only alternative is to dig up the dirt, the same thing he, himself is mired in up to his head.  He's terrified of losing the election.  He's terrified of looking at jail time, not only for him, but for Ivanka Danka, and Donnie the Dorkhead jr.  Eric?  He's just going to pop into his jester outfit and try and earn so coins in Central Park.
Posted by Dave R at 7:25 AM