The bread of life

Okay, so yesterday started off great.  I got out my chain saw and cut down an immense Rose of Sharon tree.  Took me about an hour and a half.  Then I started bagging.  West Fairview Township picks up yard waste for free (no grass clippings) as long as it's in a brown bag.  I will have 7 bags sitting on the curb this Saturday.
I was also going to get a ride in... but I dawdled.  You see I had ordered 3 new water bottles and they normally deliver around 2 - 2:30.  Well, they delivered the bottles... and something else... something I didn't order.  Twenty pounds of whole wheat flour. 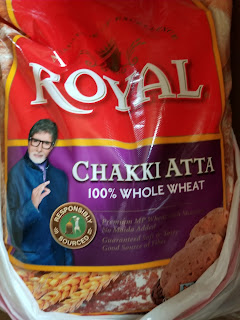 There was a gift receipt inside from an Internalist down in Delaware, an Indian woman.  Since I have no idea who she is I presumed some mistake had been made.  Being curious, I went to Amazon to find out how you send gifts - evidently some people set up lists for things they want, and you can't just randomly gift someone something by accident.  I don't have a list, however, if someone has my email address they can gift me something.  I told my brother that maybe this was a sign that I should begin baking bread... I don't think he found that too funny... you know?  The religious implications of bread being the Body.
Speaking of my brother, I had breakfast with him yesterday morning - I shot an arrow into his balloon regarding the Idiot Jerk in the White House by telling him the real power behind the thaw in North Korea was the Chinese.  All of the changes we've been seeing started what?  Two weeks after Kim's secret trip by train to see Li?  If you want to find out who the real deal makers are here, look to the Far East.  The Idiot Jerk in the White House?  They're going to play him for everything his bankrupt soul is worth.
Now, if you'll excuse me, I'm going to look up a recipe for roti.
Posted by Dave R at 7:04 AM